With VAT Without VAT
Cart 0

As a part of the Molotov-Ribbentrop pact in 1939 the Sovjet Union got a licens to make the BMW R71 750 cm3 sidevalve bike under the name M72. Soon the two countries were at war with each other but production of the M72 continued. At first they were made in a factory in Moscow but production was then moved to Irbit in Siberia to get out of reach of German bombings. After the war production went on for military as well as civil purposes in the Irbit factory and later on in Ukraine and China. In China a clone of the M72 is made since the late 1950 called ChangJiang. The ChangJiang bikes are still made, but often in more or less artisan ways. Sometimes of very good quality, sometimes not. Bike parts are still mostly unaltered since the original M72 construction. Engines are either the old sidevalve layout called the 24 hp or a overhead valve engines called the 32 hp engine. 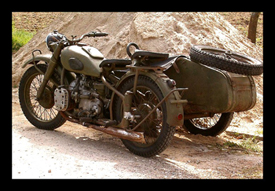 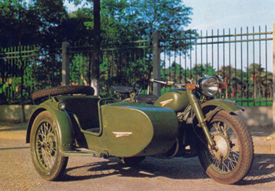 K750
In the 1950s production of a slightly altered M72 began in the Kyiv motocikli zavod, Kyiv motorcycle factory, in the Soviet republic of Ukraine. The factory was founded during the 2nd WW to repair tanks and were later used for production of the 125 cm3 two stroke Kievlanin based on the German Wanderer. In 1959 came the new model K750 with a swinging arm rear suspension as the most importnant development together with a few more horsepowers because of higher compression and cam lift. In 1964 came K750 M with a new telescopic front fork and a lot of other detail changes as minus ground electric circuit, conventional brake and clutch levers and cigar shaped mufflers. K750 M was sold to the public in large numbers until early 1970s and thereafter produced mostly for military purposeses until 1977. It was succeeded by the Dnepr MT12 that is largely a Dnepr MT10.36 with sidevalve engine produced until about 1984. 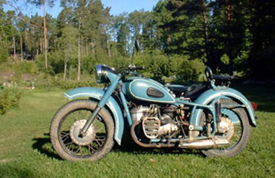 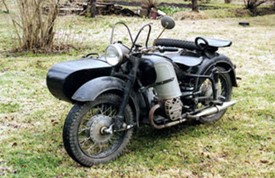 Dnepr
Around 1970 came the 650 cm3 overhead valve engine from the Kyiv factory, at first in the K750 chassis called the K650, later on developed and sold under the name Dnepr. In 1973 came the Dnepr MT 9 fitted with a new gearbox with reverse gear and altered electrics. After that came the MT10 model with 12 volt electrics, MT 11 with brake on the sidecar wheel and MT16 with side car wheel traction. Lots of parts are common since the K750M, like differential, front fork, wheels and front mudgurard. The Dnepr factory is still state owned. Production stands idle since 2009 although spare parts are occasionally produced. 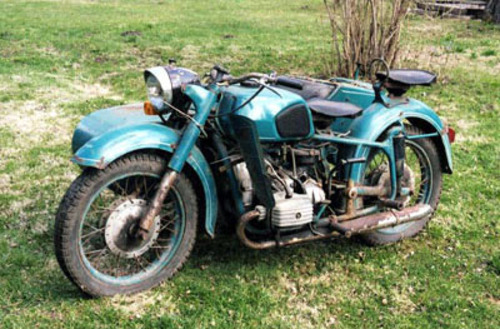 Ural
In the early 1960s a 650 cm3 overhead valve engine was launched. With some modifications it was made until a few years ago. The frame of the M72 and the later overhead valve engined M61, M62 and M63 had plunger suspension.With the M66 model in the late 60s came a swing arm rear suspension. During the 1970 and 1980s bikes was production went on with some modifications such as a different fram, 12 volt electrics and a gerar box with reverser gear. The Ural factory was privatized in 1996. Urals are currently produced with a recently developed 750 cm3 engine. 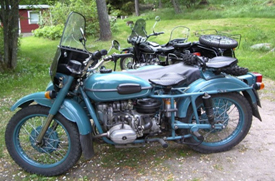 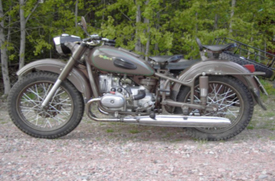